Will start off with this interesting badge. It is perhaps unique for a Commonwealth World War Two aircrew badge in that it is both marker identified and dated.

This particular type of badge was intended for wear on a tropical uniform where the badges could be removed so the uniform could be laundered. As you can see in the photo of the back of this example it would have been held onto the uniform by the loops on the badge and a cotter pin, there was also a backing plate shaped like the badge, that is unfortunately missing from my example, that would have gone between the uniform and badge holding it tight on the uniform. Visible just above the cotter pin is 44 indicating the date 1944.

These pilots wings were worn by RNZAF pilots in the Pacific theatre during WW2 but they were also worn latter by RNZAF crews based in Singapore and serving during the Malayan Emergency. 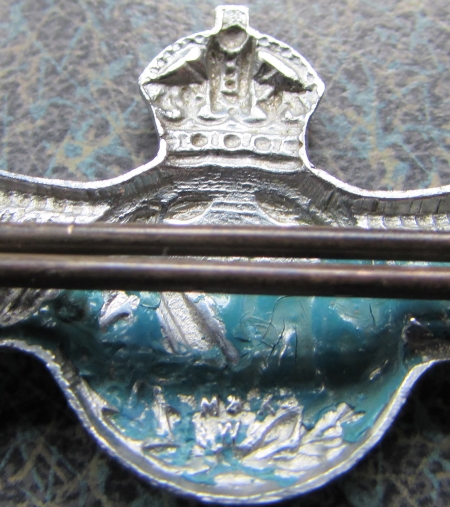 Under the blue paint, that a particular NZ collector used on the backs of all his badges, is the makers mark, M&K, W, this is for the company Mayer and Kean Ltd, Wellington. The company was established in 1902 and now operates as Mayer & Toye Ltd. It is still fully owned by the Mayer Family and still makes badges.

I have another example of this badge which is a little different from the one pictured above in that it doesn’t ever seem to have had a silver coating and is pin backed.

I believe this example was originally the same as the example shown above but has been converted, perhaps in the field, by the removal of the cotter pin and one of the loops on the back. There does seem to be a bit of scorching to the back where the pin hinge has been secured over the area of the missing loop. The other loop hasn’t been removed but has been cut and used to catch the pin. I do not believe this is an example of a “Sweetheart” badge, as it looks a little plain, I am not sure why it is not silver coated.

As in the top example this badge is marked M&K, W and again above the pin you can make out the date 1944.

Here is a example of a RNZAF Pilot wing that was worn in the  European and North African theater.

My example has seen better days but is still a nice example of a WW2, padded pilot wing. The photo of the back shows the padding and one of the backing types commonly seen on commonwealth wings of this period.

Close up of the central badge of the wings showing the embroidery of the kings crown laurel leaves and central “NZ” indicating that these are New Zealand Air Force Wings.

For comparison here is a Royal Air Force non padded flat pilot wing dating from around the same period as the wing above.

Close up of the central badge showing the embroidery of the kings crown and “RAF” showing these are Royal Air Force wings.

The photo of the back shows a different backing material that is encountered on these wings. There is also an indication that these either had press studs or perhaps a pin to secure the wing to the uniform. The red fluff on the back is a bit of the backing material I use to display my badges that has stuck to glue residue.

Will finish with some examples of the modern pilot wings from my collection. First up is the modern version of the first wing shown. Rather than pressed it is a cast wing I am not sure who the manufacture of these  are but do not think they are made by Mayer & Toye. Rather than having a cotter pin it is secured to the uniform with modern clutch backs. This wing is intended to be worn while in light blue shirt sleeve order.

Detail is not as crisp as in the earlier pressed wings but still a nice looking badge.

The back showing the mounting arrangement of pins and clutches.

The clutch backs are marked “Made in USA”. 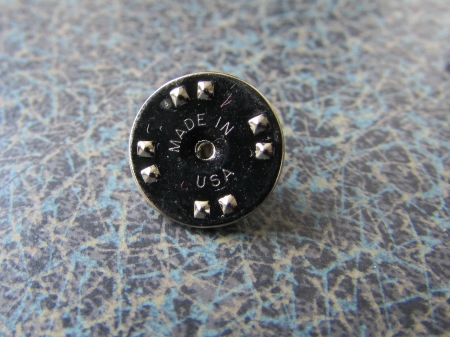 My last pilots wing is the worn on the flight suit. It includes the pilots name and this particular one belonged to a Flight Lieutenant from the 3rd Squadron, RNZAF. 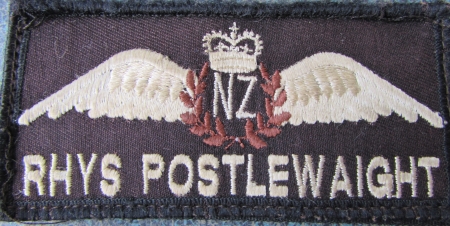 Close up of the central machine embroidered detail of this wing showing the Queens crown, laurel leaves and NZ.

The rear of the badge shows how it is secured to the flight suit using the common method of attaching badges these days, of hook and pile (commonly called Velcro). 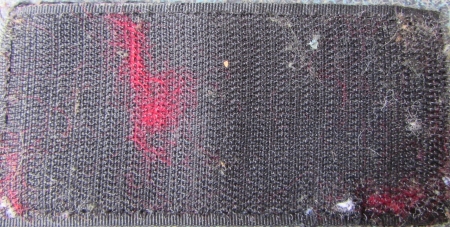