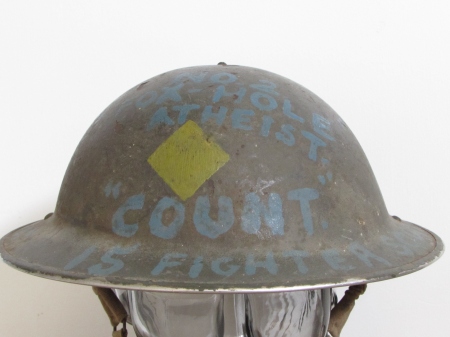 Early in World War II New Zealand soldiers wore the World War I introduced MK I helmet. Similar in some design aspects to the Mk I, the Helmet, Steel, Mk II was introduced into the list of changes in September 1938. This example is of the non-magnetic steel helmet with a stainless steel rim. Some MK II manufactured in Australia and New Zealand were made without the rim and are known in the collecting community as “Raw Edge”, Mk II’s.
This particular Mk II helmet was issued to and worn by NZ42578 Earl John HAYES.
He was Born 05 January 1919 and enlisted in the Royal New Zealand Air Force (RNZAF) 16 January 1942 at the age of 23 and 11 days. His occupation on enlistment was as a junior Linesman/Driver in the Post and Telegraph Department based in Lower Hutt. His training in NZ was based at Harewood, Wigram and Rongotai (where he did his Driver (Petrol)/Mechanic course at The Technical Training school). Was posted overseas from 18 October 1942 to 02 December 1943 serving with the 15th Squadron from 22 October 1942 till 06 June 1943 when he was posted first to 1 Fighter Maintenance Unit and then on the 04 October 1943 to 1 Servicing Unit where he served till he returned to NZ. In the Pacific he was stationed in Guadalcanal (30 May 1943-4 October 1943) and Espiritu Santo (04 October 1943-02 December 1943). When he enlisted his trade was as a Flight Mechanic but he was re-mustered on the 16 July 1942 as a Driver (Petrol) Mechanic. After his promotion to Corporal on 01 June 1944 he was again re-mustered as a Mechanic (Motor Transport) on 01 November 1944. He discharged from the RNZAF 12 April 1945. He was awarded the 1939-45 Star, Pacific Star, Defence Medal, War medal 1939-45 and NZ war Service Medal. He died at Lower Hutt Hospital on the 30 October 1987.
This helmet is unusual not only for its being covered in “trench Art”, but because the information written on the helmet also provides a narrow date range as to when it was done. Given that it has  “15 Squadron Transport Guadalcanal Ltd” pained along the brim it would seem to date this helmet in the 30 May to  6 June 1943, period when he was serving with the 15 Squadron on Guadalcanal.
15th Fighter Squadron RNZAF was formed 01 June 1942 at Whenuapai. It served in Tonga, Guadalcanal, New Georgia, Espiritu Santo, Bougainville and Green Island. The squadron was equipped with Kittyhawk and latter F4U Corsair fighters. The Squadron was disbanded in November 1945. The 15 Squadron flew more sorties than any other NZ Fighter Squadron in the Pacific theatre of  World War II. 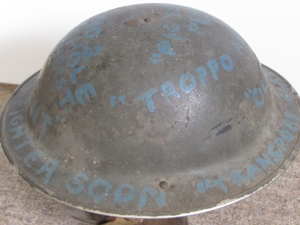 The liner in this helmet is a MK II liner. The Mk II liner was introduced in June 1939. The liner consist of a moulded -rubber crown pad and a vulcanized fabric headband which has five flaps secured with a draw string. Also visible in the photo below is the Mk II chin strap which is secured to the helmet with a Mk III chin strap lug